This highly innovative project was undertaken for a leading UK manufacturer of taping machines for electrical conductors and large diameter tubes. The Taping Machine was supplied to a customer in China. The machine is used for wrapping continuous lengths of extruded plastic pipe with steel tape. 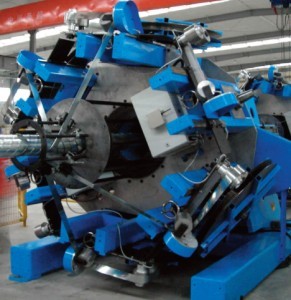 The pipe is made in various diameters from 50mm to 150mm (2”-6”) bore, in lengths up to 1km. It is spirally wound with either two or four layers of steel tape, with each layer comprising two, three, four or six tapes, to prevent the pipe bursting under high internal pressure. The pipe is finally wrapped with plastic tape. This form of construction has the benefit that the finished pipes are flexible and can be wound onto drums for transport to site. The pipe is fed through taping heads 1 and 2, each of which applies a layer of steel tape, then through taping head 3 (out of shot to the left) which applies the final layer of plastic tape. The pipe is drawn axially through the taping machine by a caterpillar. 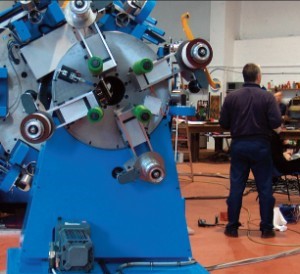 Taping heads 1 and 2 each comprise a large rotating assembly, driven by a geared servomotor, which carries six equi-spaced tape dispensers. One head rotates clockwise whilst the other rotates counter-clockwise. Each steel tape is fed from a reel through a closed-loop, servo-controlled tensioning system, then over a final roller that turns the tape to wrap it onto the pipe at the required angle. The roller angle is set manually by the operator prior to machine operation. Tape tension is also variable according to pipe diameter, tape width and wrap angle. Tape tension is continuously controlled with a maximum 1kN (100kgf) tension in each tape. Two, three, four or six steel tapes can be applied simultaneously, which ensures that the forces on the pipe remain balanced. 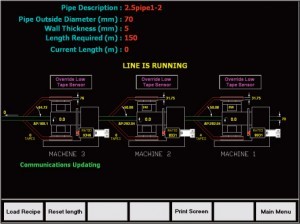 Taping head 3 applies the final layer of plastic tape. It is driven by a geared servomotor to control its rotational speed. It has four tape spindles. Either two or four plastic tapes can be applied simultaneously. Tape tension is governed by a simple friction brake on each spindle. The plastic tapes overlap to completely cover the finished pipe. The pipe to be wrapped is drawn axially through the machine by a servo-controlled caterpillar located after taping head 3.

The rotational speed of all three taping heads is synchronised with the caterpillar speed to achieve the required wrap angle. The settings, or recipe, for each product are worked out by a PC. Rotational speed of the taping heads and tension of the steel tapes are downloaded to the machine where they are controlled automatically. Because of the difficulty of taking so many power and control signals onto the rotating heads via conventional sliprings, taping heads 1 and 2 use wireless communication between the PC and a local PLC mounted on each head, which distributes the tension settings via a CAN bus link to the six tension control systems which are also mounted on the head. Consequently, only the 580VDC bus for powering the six Lenze servo drives plus an earth connection is fed to the rotating assembly via three sliprings. The 24VDC for the PLC and other low-voltage circuits on each head is generated locally from the 580VDC bus.

I provided the client with the expertise and commitment necessary to ensure this major capital project was successfully completed and the machine handed over to their customer on time and within budget.

I was given full responsibility for: